A transcedentally important match for both clubs in the race for third place in the  league. Both teams are in excellent form in the league but United need to pick themselves up from the mauling in the Rock Cup Semi-Final.

United once again have everyone available and can look back at two wins against the Saints already this season. 3 points in this match will largely nullify the game in hand advantage the Blue and Whites currently have and it is hoped that we are spared the ugly scenes that marred our last encounter in February

Match corresponding to the 10th Round of the Gibraltarian Reserves Division and played on Thursday 26th April 2018 at 20:30.

Match corresponding to the semi-final of the Gibtelecom Rock Cup and played on Monday 23rd April 2018 at 19:30. Match report brought to you courtesy of Turicum Private Bank and Quantocoin.

Elghobashy and Mouehli return to the starting line up in a change of formation that sees Manolo adopt a wing back setup. Leo and Pipo drop to the bench as the club faces one of the most important games in its recent history. 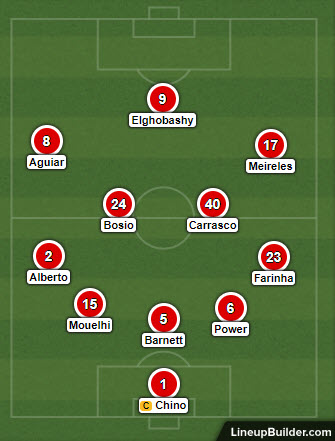 It was an atypical match from the kick off. A change of system from our usual 4-3-3 meant an unusual line up but United had the first clear chance of the match, Aguiar left his marker behind by the by-line and crossed in a peach of a ball right onto the penalty spot. Jamie Bosio arrived a fraction of a second too late to poke the ball into an empty net. Things looked bright…

It was downhill from there as Mons Calpe frankly put in an excellent display from then on. They overpowered our midfield and their strikers, top guns in the Division, probed and pestered our defence until they opened the scoring following a breath taking move. A one-two on the wing left Farinha in check mate and Onega was to provide Pibe with the chance to drill one in from close range leaving Chino no chance. It was only just desserts for Mons’ play upto that point.

Manolo looked on as wave after wave of Mons attack assailed our defence. Marco and Filipe tried to get our play going but Ayman proved an isolated figure upfront. Desperate for a reaction the manager uncharacteristically made a double substitution 38 minutes into the game throwing on Dani and Pipo to look for some creativity and to try and win back midfield.

Alas it was to no avail as Mons continued to press and minutes later, indeed one minute before Mr Canepa blew for half time, Pibe scored an unmarked header to put his team 2-0 up. Indeed it could have been worse as the referee did not blow for a strong penalty shout in favour of Mons Calpe a few minutes before the goal was scored.

The second half was to be a mirror image of the first with Mons capitalising on three counter attacks to score three more goals to put United to the sword. No matter how hard we tried, and try we did, Mons were clearly the hungrier of the two teams and the better one on the field of play. Congratulations to them on a well-deserved semi-final win. For us, the league is still there with 6 games to play and the 3rd position and perhaps even the 2nd position to play for. We learn from the mistakes made and proceed to another massive game on Sunday evening against St Joseph’s. 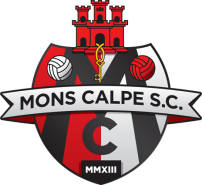 A Rock Cup semi-final that opens the door to a golden opportunity for both clubs to play in a game that can lead to European football. United come into the game in good form and with morale sky high following two straight wins since a 2-1 loss to Mons Calpe. Form between clubs tends to go out of the window for high stakes games as these ones and he who wants its more will reap the gains.

United face the contest with a full bill of health and with all men standing after welcoming back Mouelhi and Elghobashy following a ban for accumulation of cards.  Kick off is at 19:30 on Monday evening and we hope our lads get vociferous and numerous support from the stands.

A very interesting round for United as they see both St Joseph’s and Mons Calpe drop points and sees the club two points clear in third, albeit St Joseph’s have a game in hand. Lincoln saw Phoenix off 2-0 while Lions got the better of Lynx by a solitary goal stopping a torrid run of form. Glacis also gained a valuable point to claw a bit further away from the danger zone.

Round 21 is a bumper round. Lincoln and Europa face each other as well as Gibraltar United facing St Joseph’s. It can prove to be a pivotal round at the top of the table in the week where the Rock Cup semi-finals are to be played. There are all sorts of permutations and players and teams will need to be focussed and concentrated on the job in hand. Lions vs Manchester 62, Glacis vs Phoenix and Mons Calpe vs Lynx close the round.

Round Twenty One Fixtures

All photogrpahs are credited to William Gracia.

Chino gathers at the feet of Morgan 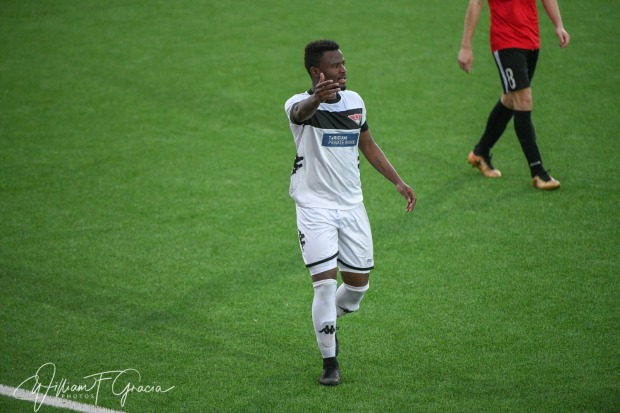 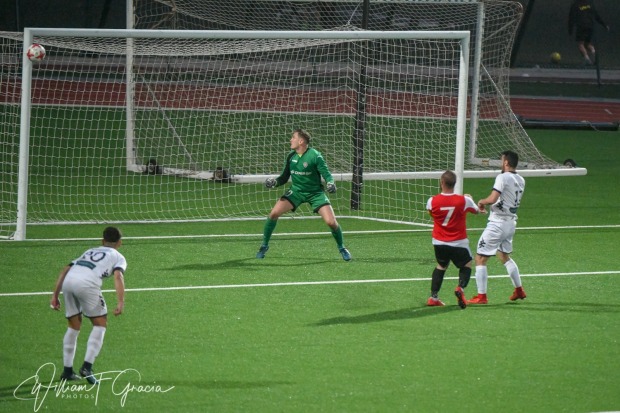 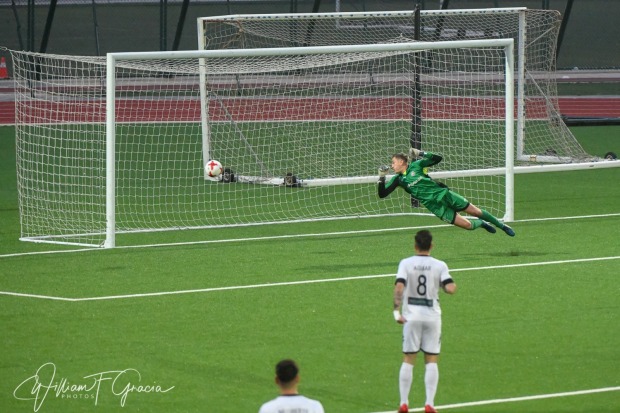 Match corresponding to the 20th Round of the Gibraltarian Premier Division and played on Friday 20th April 2018 at 20:30. Match report brought to you courtesy of Turicum Private Bank and Quantocoin.

United welcome back Chino from suspension but are missing Mouelhi and Elghobashy due to an accumulation of yellow cards. Pipo retains his berth in the starting XI while Brad Power covers the absence of Aymen. Boiso is rested with an eye on the Cup semi-final on Monday while Alberto also drops to the bench with Aguiar in at Left Back.

Both teams played out a very pedestrian and tepid first half. Man 62 had the first flashes of goal with both Galindo and Morgan having clear chances on goal. Indeed Chino was forced into a save a few minutes later as the Red Devils created a third chance in short order on the United goal by putting Luque through. Gradually, however, Gibraltar started to wake up and began to attack the Man 62 goal. Cafer dealt well with a cross into a crowded area while Marco squandered a gilt edged chance from 10 yards out when his shot cannoned off the upright. As Mr Canepa brought the firs 45 to a close things could only really get better.

Manolo reacted with a double sub at half time with Bosio coming on to inject more energy into midfield and Alberto to slot into the left back berth to release Aguiar to play further forward. The subs and the team talk seemed to have an immediate effect. United players surged forward in waves as they sought that breakthrough on the scoreline. It came via Pipo’s trickery as he was felled by Matt Cafer as he burst into the area. Mr Canepa had no hesitation and pointed at the spot. Meireles stepped up to the spot…

⚽1-0 @GibraltarUnited – @10Pontinha steps up and gives his side the lead. pic.twitter.com/luiQPBHplj

Breakthrough, 1-0. Confidence and moral was up and a second United goal soon followed after Cafer misjudged a long ball to leave with Aguiar with the simplest of goals. A shame for the Man 62 keeper as he had pulled off a number of saves to keep his team in the game.  Man 62 shoulders dropped and as the weather began to take a turn for the worse United went for the jugular, goal difference at the back of everyone’s minds.

Dani made his comeback from injury and simply carried on where he left off and scored United’s third goal shortly after a Pipo shot from the edge of the box sailed over the bar. As the lightning lit up the sky so did Meireles lit up the pitch as he scored his second of the game and United’s fourth to settle the game and take the club to 3rd in the table and 2 points clear of St Jospeh’s. The Red and Blues have a game in hand on us but THE game of the season is to be played next Saturday as Gibraltar United and St Joseph’s fight it out for third place.

Yet there is another massive game just over the horizon as league exploits need to be set aside as Mons Calpe awaits us in the Rock Cup Semi-Final at 19:30 on Monday. These lads deserve your support and we hope to see as many Red and White supporters in the stands on Monday to cheer the team on in this most pivotal of games.

Man 62 have had a torrid run of results so far and have been solidly anchored to the foot of the table for a long time now. They are 10 points behind Lynx in 9th and have still to win a game this season. That said they have been a tough team to beat and can be extremely resilient in defence.

United come into the game with the suspended Elghobashy and Mouelhi who miss through an accumulation of yellow cards. United are coming into the business end of the season and games are coming thick and fast. Momentum is crucial both in the league and the Cup and Manolo will seek 3 points to creep above St Joseph’s into third place and keep morale high.

Match corresponding to the 7th Round of the Gibraltarian Reserves Division and played on Tuesday 17th April 2018 at 18:15 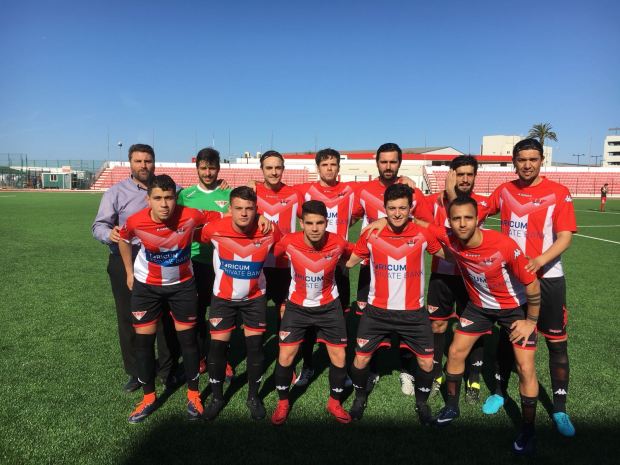 An action packed Round 19 that sees all teams placed 1st to 5th winning their fixtures as the league begins to gather pace to the end. 1-0 wins for Lincoln, Mons and United are balanced by two emphatic victories by St Joseph’s and Europa. The bottom half teams all lost and they are all due to play each other in the coming weeks in what is shaping up to be a riveting last round of fixtures.

United face Manchester 62 in the Friday Night Football game seeking another 3 points to keep them in the hunt for 3rd place. St Joseph’s on the other hand face Glacis United while Europa and Mons play out the tie of the round on Wednesday evening.  Lynx will seek victory over Lions and a positive result for them could see them climb as high as 6th in the table. Phoenix and Lincoln play the remaining game of Round 20