Match corresponding to Round 2 of the Gibraltarian Second Division. Match played at the Victoria Stadium on Monday 29th September 2014

Gibraltar United played their second league game this evening versus Gibraltar Scorpions FC, a name more familiar in FUTSAL circles. Due to injury the defence was much changed from our last match with Aaron Collado and Adrian Lopez coming in to cover the absences of the injured Shane Crisp and the missing Daniel Wahnon. Carl Thomas was serving a one match suspension after his red card in the previous game. Jared Buhagiar was played in a more withdrawn position while Kenneth Chipolina was in his familiar Left Back berth. Manager, Randal Aldorino, also rotated in goal with Kyle Goldwin getting his chance. Stefan Cumbo got a start following his goal versus Phoenix while Aiden Victor got a run out in the left wing.

The match itself was a dour affair with both teams being quite physical at times. The early period of the game saw the Scorpions keeping good possession of the ball but lacking in any serious penetration. United’s lines held strong with Willy and Dylan in centre mid, backed by a solid pairing of Aaron and Jared at the back.  It was United that got the first sniff at goal with a driven cross that was missed by our attacking players. A pattern was established whereby Scorpions passed the ball just by their half way line and United held back their ineffective attacks. However, there was a tension in the game with tackles going in and some accusations of play acting on the part of the Scorpion’s players. Ref,Gordillo, was in no way shy in dishing out yellow cards to both sides.

A lot of midfield action in the early stages of the game.

The match was more or less 15 minutes old when, after a scare at the other end, United broke out in a swift counter attack that saw some lovely interplay between our players. Quick feet and sharp minds saw the ball at the feet of Stefan Cumbo. Goal scorer in the previous match became provider as he laid the ball to captain, Andrew Lopez, on the edge of the area. Some clever play by Andrew saw him create some space for himself and with a powerful, yet placed shot beat Medina in the Scorpion’s goal to put United into the lead. Tempers were quick to flare on the pitch following the goal, but United’s defence held firm despite the Scorpion’s dominating the possession of the ball. A flurry of yellows, and talking tos by the ref saw him blow for half time. The tension off and on the pitch was palpable! 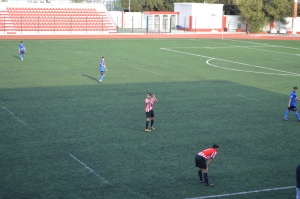 Aldorino made his first substitute at the start of the second half when veteran Damian Rocca was sent into the fray for Stefan Cumbo, who’d picked up a yellow in the first half. If truth be told the second half belonged to Scorpions. They dominated possession and had the most chances, yet only one required Kyle Goldwin to pull off a save; and what a save it was. With cat like reflexes he palmed the ball away and bellowed at his defenders to shore up and fight back. Fight back they did. As energy levels dropped, United’s lines got deeper and deeper, but for all their possession Kyle’s goal was not really under any real threat. Our only outlay was a quick ball to the flank for Justin Collado to run down the line with. Following a typical mazy run he dropped a shoulder, cut inside and let loose a belter of a shot. Scorpion’s keeper Medina was equal of the effort and pulled off a dramatic save when the crowd was on its feet cheering a goal! 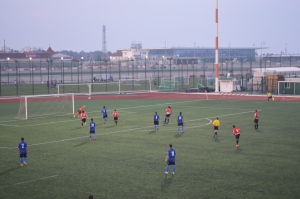 Philip Villalta came on for a tiring Aiden Victor to make his first appearance of the season and injected some pace into our front line as Andrew Lopez was shifted to the left wing. Both our full backs were kept very busy yet the gate remained firmly shut. Though Scorpions had a headed goal rightly disallowed for offside they really didn’t have any clear cut chances despite some good approach play. Perhaps some of their forward players, more used to a FUTSAL pitch sought an extra touch that was not needed. Not that United cared one iota. The ref’s whistle brought proceedings to an end and as manager Aldorino said the three points the most important thing to get from the game. Surely a better performance is on the cards in our next game against Europa Point FC. 6 points from 6 and the only defence in the division yet to concede a goal

Match corresponding to Round 1 of the Gibraltarian 2nd Division. Played at the Victoria Stadium 17-9-2014

A dull, overcast day, a harbinger of the end of summer saw the resurgence of Gibraltar United as a football club in its own right at the Victoria Stadium. Manager, Randal Aldorino, adopted a change of system from what was being used in pre season and paid off to spectacular effect. Albeit it was a very slow start to the game as both teams sought to settle those early season nerves and find their feet on the pitch. Nonetheless it was a very emotional day for Gibraltar United fans young and old that turned out in force to support the team. Illustrious names from our Past like Adolfo Ramirez and Eric Abudarham joined players, officials and supporters in cheering the team on. Indeed National Team Manager Allen Bula was seen in the stands.

The teams line up prior to kick off

The first half proved a dull affair with some Phoenix probing and Collado taking most of United’s danger down the wing. Indeed he produced the first moment of magic. A burst of lightning speed left the defender behind and a viciously whipped in cross was blazed over the bar at point blank range by Jared Buhagiar. Shane Crisp suffered a suspected broken nose in an inopportune clash of heads on the stroke of half time. Aldorino was forced to bring on a substitute (Cumbo) and it proved to be a decisive one later on in the game. We wish Shane (Warrior) a speedy recovery! Joe Borg made an excellent save to prevent Phoenix scoring directly from a corner kick in a first half in which hard tackling and hard graft where clearly evident in the pitch. William Gracia and Dylan Mañasco excelling at this in centre mid with the tireless Carl Thomas and Kenneth Chipolina supporting from the full back positions. Daniel Wahnon showed his experience by successfully marshalling a make shift defence in the second half.

United came off the blocks quickly in the second half. Striker Lee Muscat replaced Jared Buhagiar and once again Randal played his magical hand. Muscat had an instant effect adding pace and power to the front line and his presence seemed to unsettle the Phoenix defence. Some neat play found the ball at  Stefan Cumbo’s feet. A powerful pile driver to the left of the Gib Phoenix keeper left him with no chance. As the net ruffled as the ball settled into the back of the goal, Cumbo wheeled away to celebrate in front of the supporters. Gibraltar United’s first official league goal had been scored.

Cumbo is engulfed by team mates as he celebrates his goal

The goal spurred United into action and there was clearly a spring in the step. United attacks flooded forward as Phoenix struggled to contain United’s momentum. Credit to them they tried to counter attack when they could and almost scored with a delightful chip. Thankfully it sailed over the bar. Not so for United and Brad Power in particular. Some powerful play from the attacking midfielder, who was playing in a more withdrawn position due to Crisp’s injury, meant he found some space to the left of the Phoenix goal. Exhibiting great composure, he lifted his head and dinked the ball over the keeper with the most sublime of lobs. Despite the good natured cries of ‘cross’ from the stands there is no doubting the quality of the strike. 2-0 and United were coasting.

Tackles kept on flying in with a number of bookings for both sides as Phoenix fought to get back into the game, indeed Carl Thomas saw red late in the half for a second yellow. However with a predator like Muscat on the pitch, the Phoenix would not rise from the ashes like its mythical namesake. He neatly tucked away a penalty after the referee gave a deliberate handball in the area. A Phoenix defender unable to cope with the pace of Andrew Lopez’s cross from the wide areas. The game now well and truly beyond Phoenix was wrapped up by Muscat getting his second of the game a few minutes before the final whistle, feeding off a delightful Sean Gilbert pass.

Lee Muscat buries the penalty to make it 3-0

Overall a fair reflection of what was seen in the second half. United top of the league for a few hours at least. Team morale was high but manager Randal Aldorino was keen to stress following the match that the hard work had only started and the road would be a long and arduous. A massive shout out to those players who didn’t make the team squad and where there supporting their colleagues. It gave a massive lift to those on the pitch. We hope to see as many supporters in the stands in our second game against Gibraltar Scorpions on Monday 29th September.

Here is the squad that will defend our colours in the forthcoming season.