Match corresponding to the 3rd Round of the Gibraltarian Premier Division and played on Friday 16th October 2015 at 20:30.

The Premier Division continues after the last round of the UEFA Euro 2016 Qualifiers and it pits the last two winners of the Premier Division, albeit United won 13 seasons ago. After a sterling defensive display against Europa FC, United’s tough start to the season continued against the perennial champions. Nuñez had to make some reshuffles to his line up. Sean Gilbert replaced his brother Steven in center midfield while Abdul Bakkari comes back into the starting XI. With Kenneth Chipolina unable to play due to the loan agreement with his parent club, Brad Power makes his first appearance in the league at center half. Byron Espinosa, fresh from U19 Euro Qualifiers retains his starting berth. Former Lincoln FC players Alan Parker and Pitu Anes both start on the bench. An intriguing match that sees the teams lock horns for the first time since last season’s 2nd round of the Rock Cup in which the Red Imps knocked the Red and Whites out of the Cup. 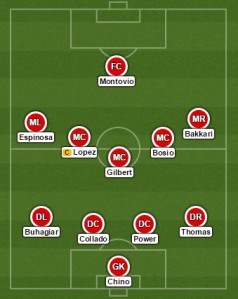 Champions Lincoln FC meant business from the kick off as they sought to impose a fast tempo on Gibraltar United. It was clear that Nuñez had told his troops to hold a solid defensive block of five men roughly on the half way line followed by another block of 4 in defence. A tactic that had paid dividends against Europa FC last time out as the score was kept to respectable levels. United held out against a stellar Lincoln line up for 15 minutes. With Aaron marshalling the defence we were solid for the initial wave of Lincoln attacks. Indeed, as the senior partner in defence Aaron was at the heart of all our tackles and guiding Brad in his first game as a center half. However, a defensive lapse on the 15th minute allowed GFA striker Lee Casciaro a simple goal with Chino left totally wrong footed. Any confidence United players had garnered in the first 15 minutes evaporated in an instant.

That confidence was further eroded on the 25th minute when towering Argentine striker headed a ball against the cross bar and bounced down. ‘Eagle eyed’ linesman, Mustapha immediately flagged for a goal deeming the ball had bounced behind the goal line before bouncing out. The incensed Chino protests made one think otherwise. Ref Barcelo took his assistant’s advice and the goal stood. There was no question though for Abiyan’s second goal, another very well taken header from a delicious Joseph Chipolina cross on the cusp of half time. United, in all honesty offered little in attack and despite the 3-0 scoreline at half time both Aaron and Brad were having a good game at the back against the Red and Black hordes.

The second half saw more of the same. Both Liam Walker and the Portuguese player Livramiento were ruling the roost in the middle of the park despite the best efforts of Bosio, Gilbert and Andrew Lopez. By the time Livramiento got Lincoln’s fourth the game was truly over. As the Red Imps took the foot off the gas United were able to show some flashes of attacking intent. A couple of runs by Bakakri almost set Montovio free on a number of occasions and a couple of corners were the only real efforts of note. Navas in all honesty only has one hairy moment towards the end of the game in which a long range shot was palmed over the bar.

Lincoln’s scoring was completed by Kyle Casciaro and a brace from George Cabrera. By that time United had a more attacking eleven on the field. Alan Parker in particular showed plenty of evidence in his 25 minutes of his skill and class as he tried to move between the Lincoln lines. He was hungry and eager for the ball and in all honesty should have a starting berth in our next match. Pitu Anes also made his debut for the club as he had 20 minutes on the pitch substituting a tiring Bosio, the latter having truly made a titanic effort in the face of a juggernaut. 7-0 seemed a hefty scoreline for the efforts United had made but there was no questioning the fact Lincoln deserved the three points. We learn and we move forward to our next match which sees the Reserves in action on the 29th October while our Premier campaign resumes against Glacis United on the 1st November.

Match corresponding to the 2nd Round of the Gibraltarian Premier Division and played at the Victoria Stadium on Saturday 3rd October 2015 at 19:30

United faced off against Europa FC. Another historic name of local football but with an opposing philosophy to the one adopted by Gibraltar United in that their ranks are full of foreign players. Local sporting media picked up on this in the build up to the game. Whatever their philosophy no one can deny that Europa have made a great start to the season. They took Lincoln all the way in the Pepe Reyes Cup and played very well in their league opener against the Red Imps last week. They have qualified for the Europa League for two seasons in a row and no one in the club was taking this match lightly. Nuñez’s line up indicated as much. 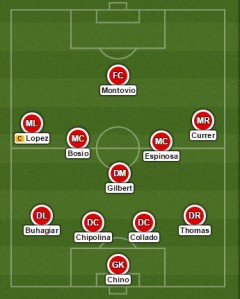 With Mark Casciaro serving a ban imposed on him by the GFA it was left to Steven Gilbert to take on the mantle of defensive midfield cover. He would no doubt be busy. Mindful of not seeing much of the ball, Nuñez went for the ultra fit Currer at the expense of Bakkari to support Carl Thomas on the right side of our team. A midweek injury to Lee Buhagiar meant that Kenneth Chipolina, on loan from Lincoln FC, made his second debut for the club. Both he and Byron Espinosa had played a full 90 minutes for the Reserves midweek. ‘Chino’ Goldwin was also back in goal having served his one match ban in the aforementioned Reserves game.

Your usual reporter was unable to attend the match but thanks to @GFTMatchDay, @5point_4 and @FGScoreCentre for their excellent coverage of the match keeping us all abreast of the goings on at the stadium. It was clear that Europa FC would be having the lion’s share of the possession and so it was. Their first goal came from a header on the 6th minute from Pedro Carrion. Headers were to be a constant source of threat throughout the match as most of Europa’s chances came from such opportunities. 3 more times at least in the first half, with Chino excelling himself on one particular save. The second half was more of the same. Their second goal came from a well delivered cross that was put away by Javi Martinez in the 77th minute. Good to see Naoufal El Andalussi and Alan Parker making their senior debuts for the club.

Captain Andrew Lopez spoke to us after the game telling us he was proud of the effort every single player had made on the pitch. He conceded the goals were mistakes that can be rectified and he was proud to lead such a group of players against such a prestigious club. He saw the performance against one of the top sides as one to build a lot of confidence on moving forwards especially in our next game verses champions Lincoln FC. Indeed these thoughts were echoed by other supporters and opposition players alike.

No games now until the 16th October as Gibraltar play their last two UEFA Euro 2106 qualifiers away at Georgia and versus Scotland in Faro. Good luck to our goalkeeper Liam Neale who is joining the squad.